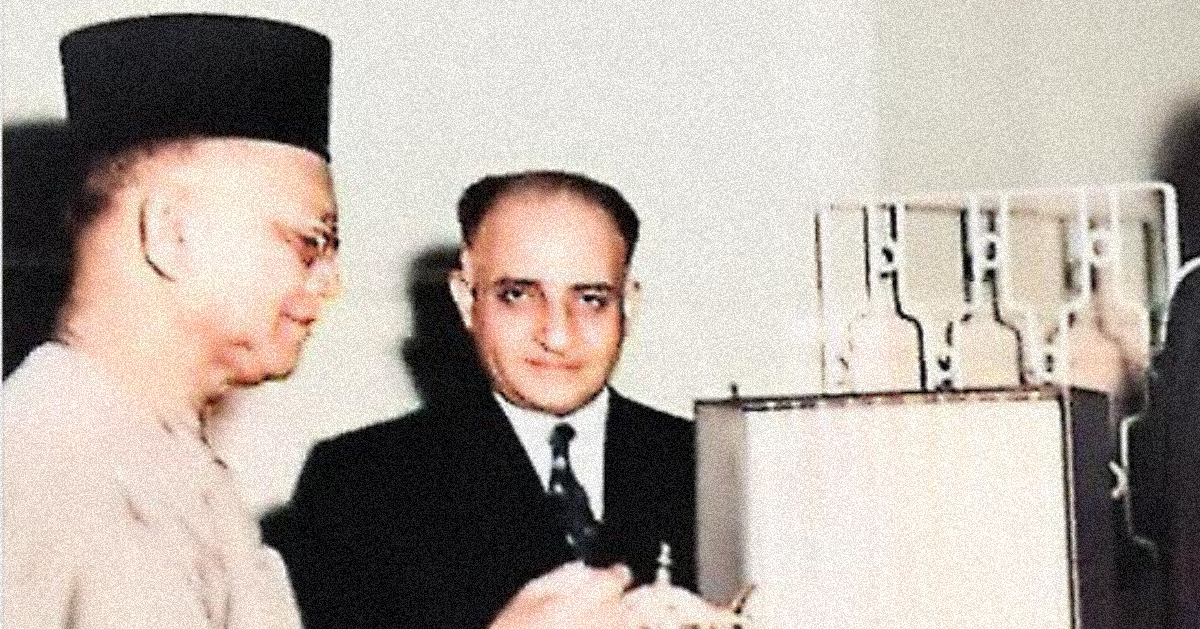 Mir Ghulam Ali Talpur (Senior) belongs to the Shahwani branch of Talpurs. He was born at Tando Muhammad Khan on September 19, 1909.

He took his early education in Tando Muhammad Khan, after which he was sent by his family to Karachi for further education. For higher education, he went to Aligarh and then to Bombay (now Mumbai) where he graduated from Bombay University.

Mir Ghulam Ali Talpur Sr. during his entire political career never lost in any general election that he contested. His political career began in 1936 when he contested election from Badin – Tando Bago constituency. This was so because of a family decision according to which his cousin Mir Ghulamullah Khan Talpur was given the home constituency seat (which he won). Mir Ghulam Ali Talpur Sr. won and became a Member of the Legislative Assembly (MLA). During his political career, he was twice elected as the President of the Local Board, Hyderabad.

He first became a minister in Sir Ghulam Hussain Hidayatullah’s Sindh Cabinet in 1940. Then he continued to be both provincial and federal minister from time to time in different cabinets until General Ayub Khan’s martial law. He held many important portfolios like Revenue, Home, Interior, Law, Industries, Education, etc. Twice, he narrowly missed the Sindh Chief Minister’s slot – once he lost to Yusuf Haroon by two votes in Muslim League Parliamentary Party election and the second time when in 1953-54 the Governor-General Ghulam Muhammad disqualified him under EBDO (Elective Bodies Disqualification Order) from becoming the Chief Minister. Thus he had to nominate Abdul Sattar Pirzadza as the Chief Minister and himself choose to become the Speaker of the Sindh Assembly. He also nominated two candidates for ministerial positions in the Sindh Cabinet. They were Kazi Muhammad Akber and his own younger brother, Mir Ali Nawaz Talpur Sr.

So much was his nomination of Mir Ali Nawaz Talpur Sr liked by the then leader of the opposition G. M.Syed that one day he came down to Mir sahib’s official residence in Karachi ”The Qasr e Naz” to felicitate on what he described as “his best decision” – a very rare thing for a person like G. M.Syed to do. Throughout the tenure of the Sindh Assembly, G. M.Syed never asked any question or moved any motion against Mir Ali Nawaz’s ministry. Such were the values in those days.

In 1954, when he was elected as the speaker of the Sindh Assembly, he was asked by ‘the forces that be’ to get the one unit resolution admitted and passed by the assembly for which a session was held in Hyderabad. Upon his point-blank refusal to go against the wishes of the members he was arrested from his Civil Lines, Cantt. Hyderabad residence at around 3 AM and sent into the far-flung area – Mitthi – in times when there was no metalled road to go there. He was taken there on camelback to cause him distress as he was diabetic and a heart patient. Later on, a concocted case of conspiring to get a foreign monarch assassinated was filed against him which was later dismissed by the competent court. During his period of imprisonment at Mitthi, all the hospitality was taken care of by the Mirs of Mirpurkhas especially late Mir Mir Muhammad Khan (Mir Achan), who was at the forefront of taking care of him. Also worth mentioning is the valiant role played in Sindh assembly by late Mir Ali Ahmed Talpur Mehmoodani in support of Mir sahib and against One Unit Bill.

Here is how Ardeshir Cowasjee, a prolific writer and Dawn columnist puts it: “In 1954, forty-two years ago, when the One Unit issue was to be voted upon in the provincial assembly, the then chief minister, Mohammed Ayub Khuhro, in cahoots with his minister Pir Ali Mohammed Rashdi, realizing that the honorable Mirs of Talpur would vote against their proposal, acted. Mir Ali Ahmed Talpur was arrested on a trumped-up charge, Mir Rasul Bakhsh Talpur managed to escape and hide, and the smallest and gentlest of the three, Mir Ghulam Ali Talpur, was bodily picked up and bundled off on the back of a camel to Mitthi, the same old Mitthi in the Thar desert.” (Dawn, The judiciary triumphs-V, 18 July 1996). Another writer, Hafizur Rehman, calls this act of Mir Sahib’s arrest as ‘abduction’ and a kind of ‘dirty tricks’ (of threats, bribery, and arrests) which ‘the real powers’ often employ in Pakistan to undermine their opponents and hide their own misdeeds. He writes: “One of the most memorable of these was the abduction of Mir Ghulam Ali Talpur on camel-back so that he should not be able to vote against Sindh’s acquiescence in the amalgamation of the western provinces into One Unit.” (Dawn, ‘Dirty Tricks’, 21 June 1997).

The other time if somebody stood with Mir sahib were the Kazi brothers of Hyderabad whose paper openly supported him against Ayub Khan’s candidate Col. Hyder during the first election to the national assembly held under BD (Basic Democracies) system. In that election, in spite of the government’s opposition, they wholeheartedly supported Mir sahib who won that election with a large majority. Upon being elected as the Member of the National Assembly (MNA) Mir sahib refused to compromise with General Ayub Khan and hence chose to sit in opposition until he was disqualified by the tribunal for having been Ebdoed (Elective Bodies Disqualification Order). He thus retired and got actively involved in farming and agriculture.

The National Stadium, the hub of the sports activities of Karachi, is the brainchild of Mir Ghulam Ali Talpur Sr. When he was Sindh’s Revenue Minister, he conceived the idea of providing Karachi with a sports stadium of international standards. He thus quickly sanctioned its land and initiated its construction plan. One can still verify the records for the same.

He was instrumental in the spread of education and health care in Sindh. He quietly supported many young people in their pursuit of learning. He also donated fifty acres of his prime urban land in Tando Muhammad Khan for school, college, and hostel which are still there under his name. He also donated a large plot for the establishment of a hospital.

At the time of the partition of the sub-continent, he and other elders of his family for the first time went to the doorsteps of the distressed Hindus, asking them not to emigrate. His family did not accept any property or things offered by the emigrating Hindus. At the same time, they opened their hearts and homes for accommodating the immigrating refugees from India.

Mir sahib led several delegations abroad. In 1957 he represented Pakistan at the independence of Malaya, in Kuala Lumpur. He also attended the coronation ceremony of Queen Elizabeth II as the head of Pakistan delegation in 1953. In 1956 he accompanied President Iskander Mirza on an official tour of France and Spain. In Spain, along with President Iskander Mirza, Mir sahib was also knighted by General Francisco Franco.

Mir Ghulam Ali Talpur’s hospitality is well known to all. Among his guests were King Saud ibn Abdul Aziz of Saudi Arabia, King Hussain bin Tallal of Jordan, King Faysal of Iraq, Prime Minister Zhou Enlai (Chou En-lai) of China, King Zahir Shah of Afghanistan and many other dignitaries from all over the world. The Aga Khan family enjoyed a special relationship with Mir sahib, especially Prince Aly Aga Khan who used to visit him every year for hunting. Prince Karim Aga Khan had also been Mir sahib’s guest both at Hyderabad and Tando Muhammad Khan. Many stalwarts of their time, like Khan Abdul Ghaffar Khan, were his close friends.

Mir sahib was a great collector of art and antiques which included swords with gold and gems, khanjars (knives), carpets, curios like pens, etc. He had a great collection of rare books and manuscripts on religion ( i.e. handwritten Quran), books on other topics, carpets, etc.

This man of many virtues died somewhat prematurely at the age of 54 years on October 19, 1963. His eternal resting place is located in Tando Muhammad Khan.